Bans are one punishment type Riot uses to punish various types of unwanted behavior like toxic behavior, cheating or account sharing. The length of bans and the process how bans are given depends on the type of misbehavior.

This article is only referring to account suspensions, not to other types of bans like Esport bans or board bans.

In the current Instant Feedback System bans are used as the two highest levels of punishment of overall 4 possible punishments[575]:

Exactly as the two Chat Restrictions, the bans are applied by the Instant Feedback System which uses reports and chat analysis as basis for judgement. Normally the bans are only given after a player went through the previous levels of punishment. However in very extreme cases temporary bans or permanent bans can be given immediately without previous punishments.

After the 14-day ban, just a single game of misbehavior can lead to the permanent ban. [326]

We have only limited knowledge how frequent each punishment is given. About 5% (or less, depending on the server [371]) of the community receive at least one punishment in their entire time playing LoL[190, 199, 256, ]. We also know that 0,006% of the community get permabanned for toxicity [605]. This means that one out of roughly 833 players who gets punished receives a permanent ban. Details about all other punishment levels are not public.

However we know that at 91,6% of the players who receive just one punishment (most likely a chat restricion) do not get another punishment [20, 410], so we can assume 14 day bans are also pretty rare. We know for a fact that the combined number 14 day bans and permanent bans is “less than 1%” [298]. If we ignore the likely possibility of the second punishment being a 25 game chat restriction the maximum percentage of 14 day bans is 0,42%.

It’s worth mentioning that Riot never lifts suspensions that were given due to toxicity [557, 289], the reason being the failed “Last Chance Program” where permanently banned players had the chance to unlock their account again by leveling up to lvl 20 without being banned again. Since 95% of the candidates failed, the Program was closed and Riots policy changed to never unban players who got permabanned for toxicity [391].

The obvious exception are bans that were not given due to toxicity but by mistake, i.e. when the player is completely innocent.

Before Riot developed the instant feedback system they used several different punishment systems, containing different kinds of bans or no bans at all.

In the first version of the old Tribunal voting system Riot used 3, 7 and 14 day bans as well as permanent bans.

As this graphic shows, not all bans were equally successful, even with reformcards. This is why the ban system was reduced to 14 day bans and permanent bans later. In Season 5 Riot mainly relied on very long chat restrictions instead of bans. We are not sure if permanent bans for toxicity existed during that time. Later Riot went back to using bans again, due to limited success of the long term chat restrictions. 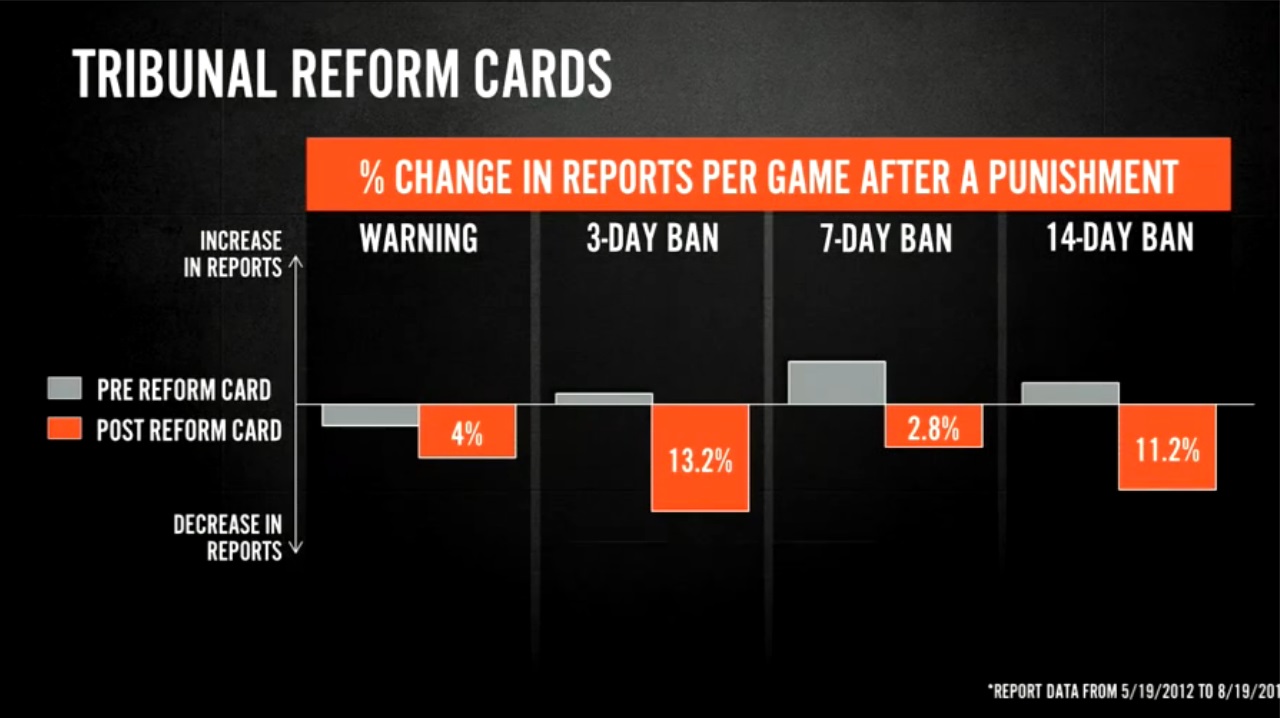 3. Bans for other violations

According to Riots support, permanent bans for excessive leaving are possible. Due to the rarity of excessive leavers we do not have any evidence on this.

The Feederbuster uses 14 day bans and permabans to automatically punish obvious intentional feeders after 1 or 2 games [273].

These bans are given for the use of any kind of illegal software, abuse of bugs or any other attempt to gain an unfair advantage in the game. These bans are normally 14 day bans or permanent bans.

Accountsharing of any kind (no matter how it happens or for what purpose) is normally punished with 14 day bans or permanent bans [583,620]. Boosters additionally lose all previous ranked rewards and are unable to earn ranked rewards for the current season. Repeated offenders get permabanned. [621]

These bans are given by Riot when an account is compromised in order to prevent further harm. This normally happens after a player contacts the Support after his account got stolen. The ban is pseudo permanent, i.e. it’s a permanent ban that is lifted as soon as the original owner of the account can prove ownership.

These bans are given by Riot when players fail to pay the money they owe Riot for Riot Points. For example this can happen when a player tries to buy RP via direct debit system and his bank cancels/reverts the transaction, for example because there is no money on his bank account. These pseudo permanent bans for chargeback issues last until the player pays the money he owes Riot and Riot confirmed this transaction.

Riot is known for not lifting or reducing any kind of ban, including bans that were caused by the account being compromised[582], except bans for chargeback issues or account security. The only exception are bans that were given by mistake, i.e. when a player gets banned without breaking any rule at all. In the old Tribunal voting system the rate of false punishments was below 0,1% [619]. In the Instant Feedback System the rate of false positives was 1 out of 6000 in May 2015 [619]. There are two known occasions where bans by the automated chat analysis were lifted. The first occasion was popular on the boards and reddit and is often called the “Billy vs the machine” case, where a player named Billy got banned by the automated chat analysis for flaming himself.

The second occasion was in summer 2015 where a few European players got permabanned due to an unknown human error at Riot. These bans got reverted automatically one day later.