1. What is Dynamic Queue?

Dynamic Queue is a historical feature that does not exist anymore. It shares some similarites with the Qlex Queue that replaced it in the end of 2016, but is not identical. This queue allowed players to queue for draft pick and ranked games in groups between 1 and 5 players. This queue replaced the old Solo/Duo and Party selections, but only existed for about a year and was later replaced by Flex Queue and Solo/Duo Queue.

Dynamic Queue was introduced in Season 6. It allowed each player to select a primary and a secondary role, not only among the common lane positions, but also with the choice of selecting “fill” for faster queue times [313]; the tradeoff for this is that it automatically selects the first vacant role. Rewards were planned to incentivize choosing the “fill” option, in case there were too few players doing it, as it’s a high demand position [313, 570].

Specific role selection was designed to let players get their preferred positions, instead of “gambling” and getting roles they don’t want to play [500]. Premade duos are restricted to choosing at least three unique roles, so as to avoid bot lane reservations [509]. There were no rank-related restrictions for full premade groups in Ranked queue, but during July 2016 Diamond V and higher players were restricted to groups of 1-3 players to prevent full professional teams from stomping smaller premade teams [624].

However, this last feature resulted in Diamond and above players being unable to play as a team, and due to popular demand, Riot reinstated Ranked 5v5 for all ranks, but with scheduled times so as to avoid teams queueing up in off-peak times and not finding any matches [626]. In August 2016, further modifications were made to improve the quality of team matchmaking in Master tier [625].

An “autofill” mode was introduced in July 2016 to adjust queue times, especially in high ranks, due to long waiting times that were deemed “unacceptable” [624]: 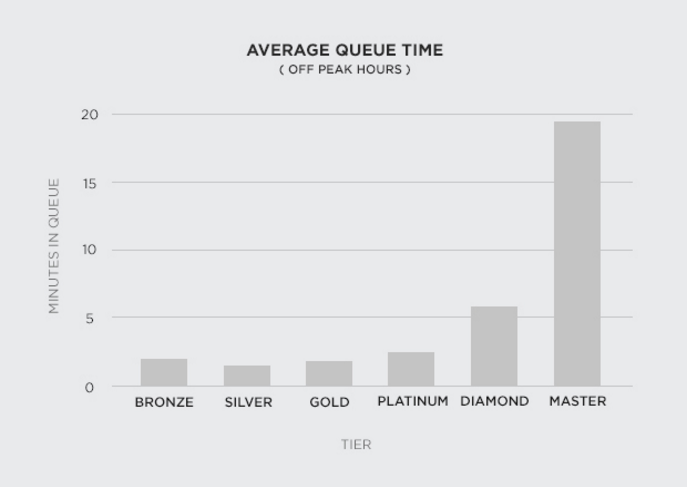 A “promo helper” for Gold I and below feature was launched alongside Dynamic Queue. It serves the purpose of reducing “promo anxiety” and reflect better the skill improvements players face, thus helping them climb the ladder [627].

Around July 2016, ranked emblems were introduced to differentiate between solo, dynamic and team players, also as part of a desire to give pure solo players some means to get recognized for their individual achievements [626]. Getting an emblem for the preferred mode requires winning 25 ranked games. However, solo players are required to win at least 90% of their last 25 matches to get the solo emblem, due to Riot wishing to keep the integrity of both the emblem and solo queueing intact [625].

About five months since the introduction of Dynamic Queue, the chance of getting the selected primary position varied according to each role, with support mains having a 95% chance of getting their position. This highlighted some underlying problems with the role selection algorithm, which prompted Riot to adjust it to increase the likelihood of players getting their primary role [624]. 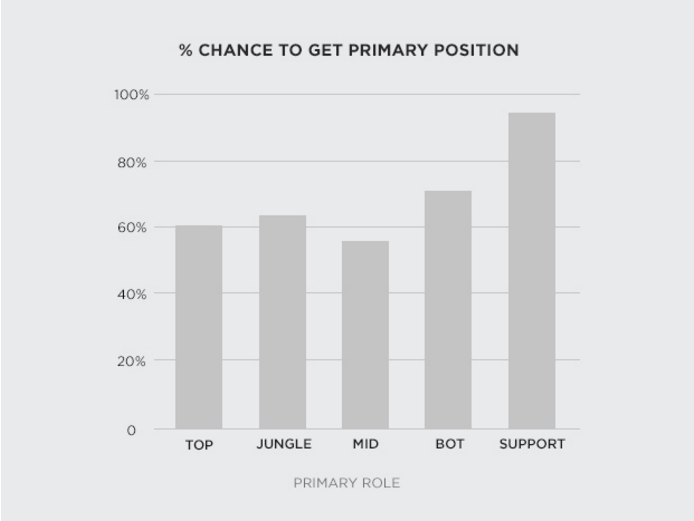 Since Dynamic Queue allowed up to five premade players, steps to balance matchmaking were taken in order to reduce the disadvantage smaller sized groups may meet. Initial tests in Normal queue showed that 95% of the groups were paired up with similarly sized groups [35]. However, around July 2016 it was clear that groups of 1-3 people were, more often than not, battling full five-men premades [624], hence Riot modified the algorithm to balance the situation. 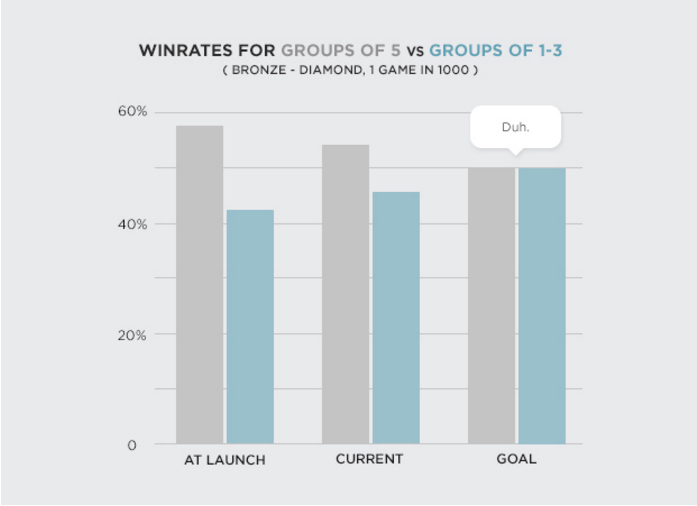