When talking about behavior or skill, players often bring up the age of player as a possible explanation for differences. Especially younger players are often seen as more toxic and less skilled. Data collected by scientists, Riot and players however indicates that this most likely not true.

Despite many player’s belief, lower skilled players do not display a significantly higher amount of verbal toxicity.

There is no linear relationship between toxicity and skill.

Lower skill ranges, as well as mid to high-skill ranges show a small increase in toxic behavior, while there’s a decrease in the very high-elo demographic.

The scientist Kokkinakes, Lin, Pavlas & Wade published an article called “What's in a name? Ages and names predict the valence of social interactions in a massive online game”. Among other things they researched how the age of a League player affects his toxicity. The results of this study have to be interpreted very carefully. They found that there is indeed a very significant correlation between age and better behavior. However this correlation is only significant because of the extremely high number of subjects (i.e. players). The effect size itself is extremely small (R²< 0.001), which basically means that there is almost no difference at all between older and younger players [469]

This is very similar to Lytes statement on ask.fm, where he said that there is no link between a players age and his toxicity and that younger players tend to report toxic behavior more often, which might indicate that they are opposing toxic behavior stronger than older players [603, 79]

A reddit survey (non-scientific! Use with caution!) by the user corntastic gave additional insights in how much players tend to overestimate themselves. It showed that a players age doesn’t seem to have any meaningful impact on the ability to correctly estimate your own skill. However younger players have a stronger tendency to think they have superior skill in comparison to their teammates. 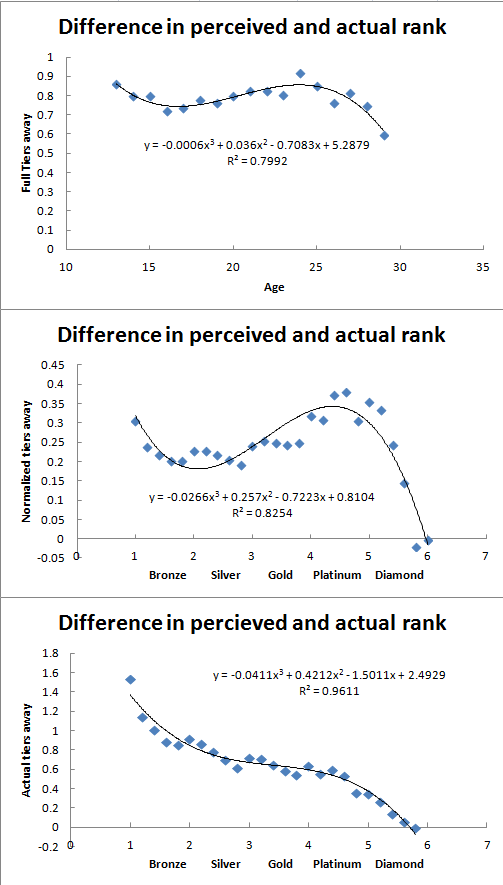