The term “premades” or “premade” is commonly used to describe 2-5 players, usually a group of friends, who queue up for a game together. If there are players in a team who don’t belong to this premade group, they are often referred to as “randoms”, because unlike the premade group, they have been matched with random teammates.

Because premade players often have a better synergy than strangers, and have the advantage of using voice communication, adjustments to matchmaking need to be made,

in order to not give the premade team an unfair advantage.

In 95% of games, premades were matched against other premade groups with similar sizes,

To balance the odds. This applies to Normal Draft, and Dynamic Ranked matches. [35]

Full premade groups showed an increased win rate than smaller groups with only 1-3 players. Because of this, Riot has made adjustments to the matchmaking of premade groups in July 2016. [625] 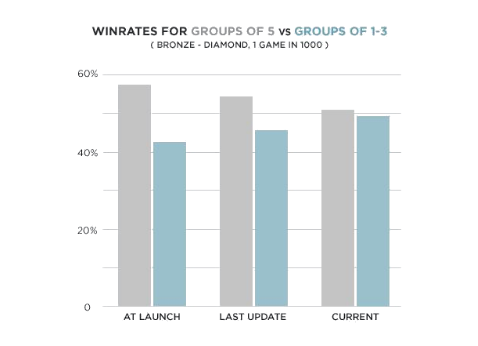 3. Influence of premades on toxicity

Premades have a somewhat bad reputation in the League of Legends community.

Some say that playing as a random, with a premade group in the team creates a negative experience because premade groups are more likely to blame the random player for mistakes, and exclude them from the team.

However, this is mostly proven to be incorrect. While there are bad experiences created by premades, generally speaking, premade groups of 2 and 3 people are not behaving worse than solo players. And while premades of 5 obviously get along well, groups of 4 show slightly increased levels of toxicity. [36]

Team chat analysis is disabled for premade groups of 5. Banter or insults between friends is not punished, as they set their own rules for acceptable behavior. If there’s just one random in the team though, this is not the case, and normal rules apply. [424] [308]

This means that in the vast majority of games, players do not even realise they are playing with a group of premades, and they don’t have a terribly negative impact on the game. [322]

Teams with one premade group show better behavior than teams with 2 premade groups with around 18% more honors, 26% fewer reports and 2% more win ratio.

The reason for this is suspected to be the power struggle between the two groups. [158]

5. Why do players perceive premades as bad ? - Psychology

The numbers clearly show that premades are not as bad as many people believe.

Premades of 4 are often portrayed as more toxic because of biased views on them.

The most influential are Negativity Bias, as well as Confirmation Bias.

Here’s a brief and incomplete definition of those:

People are more likely to search, interpret and remember information that confirms believes they already hold.

This means that players who meet a friendly and  a toxic premade group are more likely to remember the bad group due to negativity bias.

Players who already believe that premades are more toxic, will most likely remember one negative premade group they meet, while disregarding that the last ten games they played with premade groups were completely free of toxicity.

A third reason is that players often don’t even realise they are playing with a premade group which is behaving friendly or neutral, while toxic premades are more likely to be identified as premades.