1. What are Reform Cards and how do they work?

Reform cards are the chat logs punished players receive, in order to learn what exactly got them punished. These chatlogs can be viewed in a pop up, which appears once you log into the client. In the past the mail every punished player received also contained a link to a browser version of the chat logs [223]. However this feature isn’t active anymore. There are also no more emails when a player gets banned for toxicity since all relevant info can be accessed in the client.

The reform cards shows the player his own chat of up to 3 recent games that represent behavior that caused this punishment. Chat from other players is not included in order to avoid that the punished player focuses on what others did wrong instead of focusing on improving his own behavior.

The main purpose of reform cards is to help players improve their behavior and be transparent about what exactly got them punished [455]. The chatlogs are helpful because often players are not aware or don’t remember that they misbehaved without being shown examples of their behavior. 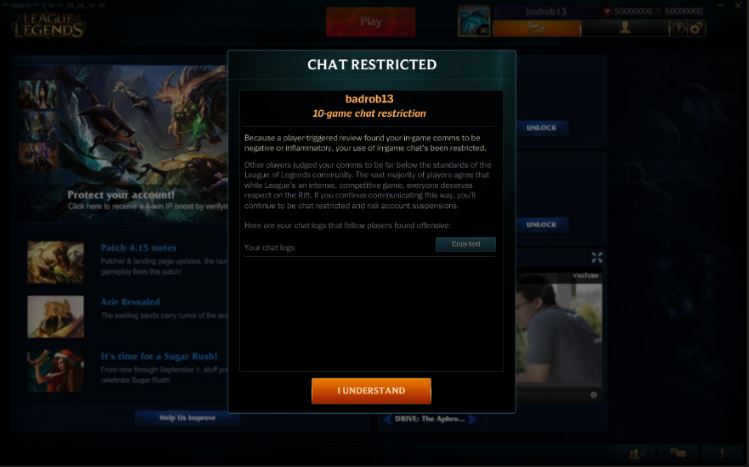 The main effect of reform cards is an increase in the percentage of players who improve their behavior after being punished and get less reports aftwards [101, 57]. 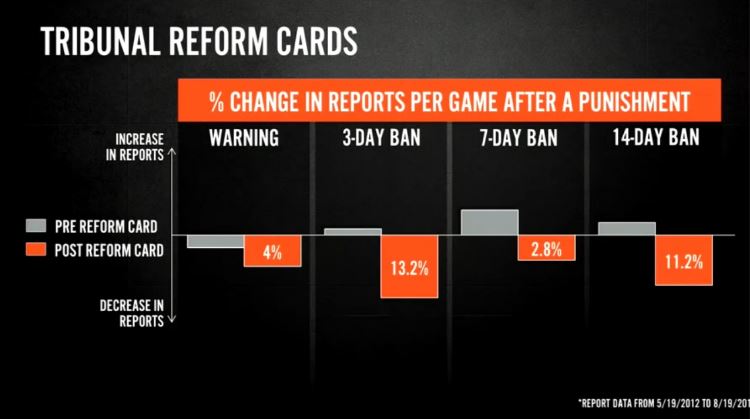 Another result is that way less people complain about their punishments, partly because they realize their misbehavior on their own and partly because other players can demand them to post their chatlogs, which makes it very difficult to pretend you are innocent when you are not [547].