Blaming is a behavior that often is considered to be toxic or partly causing toxicity [17]. Community surveys [3] have shown that players do not generally agree what role in LoL can be blamed for a loss most often, but that this opinion strongly depends on the main position of a player. There seems to be a pattern that players tend to blame those roles that have the most potential influence on their own lane, excluding their own role. For example ADC and Support mains mainly blame each other while mid laners mainly blame junglers.

Contrary to common belief Jungle is not the most blamed role, but ADC. Top laners are blamed the least, probably because of their isolated position on the map.

The survey data is from 2014, so gameplay changes might have changed these numbers. 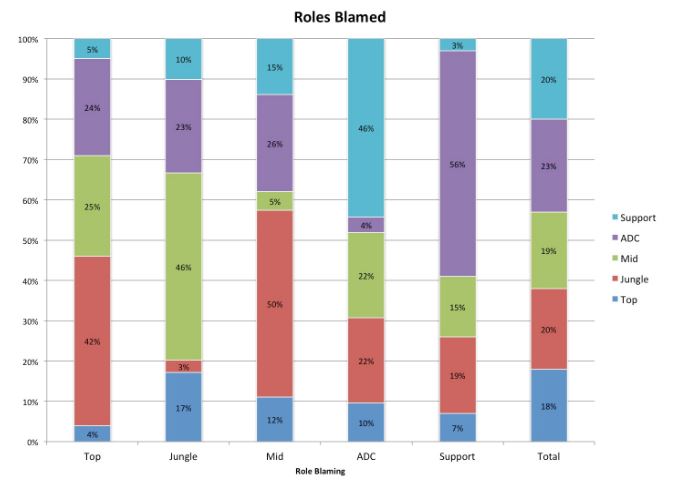 Blaming other players lack of skill is often considered to be more frequent the lower your skill is, due to the perceived skill difference between the player and his teammates, enhanced by the Dunning Kruger effect.

Blaming might be one of the reasons why MOBAs experience a lot of toxicity in comparison to some other games. In MOBAs you strongly depend on other players which makes it a lot easier to blame them for a loss [17].

The tendency to blame external factors (like other players) for failure is a general human tendency, caused by the fundamental attribution bias.